This is the forth article from a series of blog posts on how to deploy a symfony PHP based application to a docker swarm cluster hosted on Amazon EC2 instances. This post focuses on the final and last step, the deploy. 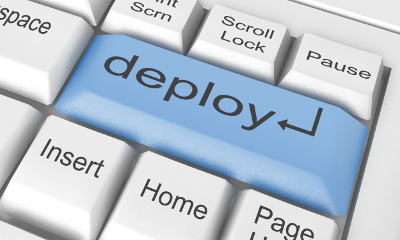 This is the forth post from a series of posts that will describe the whole deploy process from development to production. The first article is available here,
the second here and the third here.

After covering the steps 1-3 and having prepared our infrastructure, we can see how to deploy our application to production. Almost the same approach can be used to deploy not only to production but also to test environments.

Workflows are just another section from the same .circleci/config.yml file and here they are:

In this workflow configuration we have 3 jobs.

The node build_and_deploy-workflow is just a workflow "name", CircleCi allows multiple workflows for the same project, but will not handle this topic now.

As said, there is a job named deploy_to_live that is responsible for the live deploy. The job is just another portion of the same .circleci/config.yml file we saw in this and previous articles.

Let's analyze step-by-step the build process by looking in detail at the .circleci/config.yml file.

Again, as it was in the build, this part of the configuration file is just about setting up some basics for the deploy environment. The only difference with the build job is the openvpn package installation because it will be necessary to connect to the docker swarm manager that will run the deploy.

This will connect to the VPN and will wait till the connection to myapp-manager.yyy.local on the port 2377 does not become available.

The folder .circleci/vpn-live contains the OpenVPN configuration files necessary for the connection to the VPN. I will not tackle this topic as it is a completely different subject.

This is obviously the most important part, the deploy to the cluster. We login to the docker registry and later running docker stack deploy effectively deploys the application.

The omitted part: most probably you application needs some credentials for the database connection, api keys and many other configuration services. A good way to handle credentials can be using done using the docker secrets management, but in this application
I've used symfony environment variables to configure the application, placed them in the CircleCI web interface, and exported them right before running docker stack deploy.

Alternatively is possible to place the exports in a dedicated file (exports_live_vars.sh as example).

You (reader) should have noticed that I've used a different docker-compose file, nameddocker-compose.live.yml for the deploy.

Whe www container binds the port 80 so the web server is exposed. The rest of the file defines only the image names to download from the registry and the section deploy used to configure the rolling updates policy (this article gives a good overview of what a rolling update is).

The policies defined by deploy are:

This article combines the results achieved in the previous three articles and show how is possible to setup a relatively sophisticated and expandable continuous delivery pipeline.

The application has been developed, (tested!), built, (re-tested!) and deployed.

Obviously there are as usual many topics that require attention and improvements, as:

In the next article will make a summary of this 4 blog posts and will try to answer to some of the open questions by showing some of the improvements implemented in the project that were not easy to pace in the blog post stories.